← more from
Nowadays Records
Get fresh music recommendations delivered to your inbox every Friday. 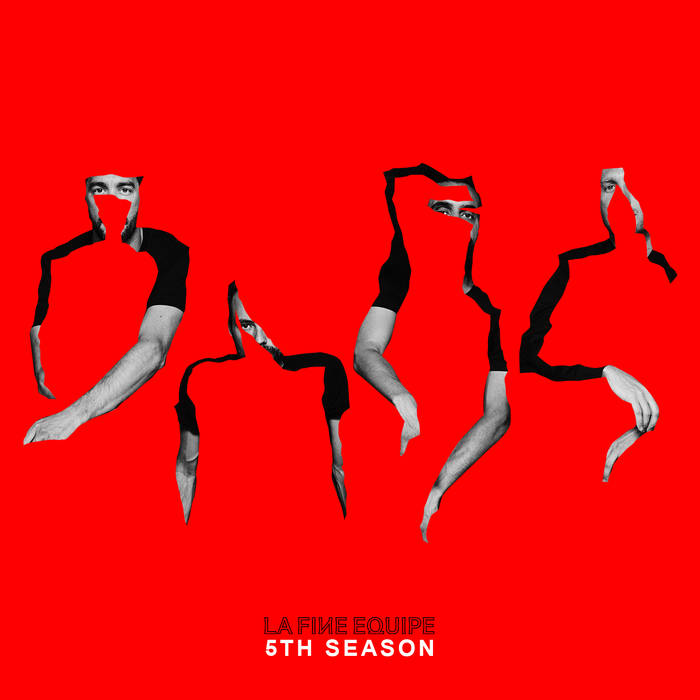 Let’s be clear: La Fine Equipe is a band. The numerous hats wore by its four members are so various that it could mislead one’s. Indeed, surrounding Blanka, oOgo, Chomsky and Mr. Gib, there are recording studios, collaborations, lives, side-projects… There is also and especially a whole universe built during the past ten years around their passion for beatmaking, embodied by the release of « 5th Season », new album.
So yes, La Fine Equipe is a band, but it’s also much more than that.

Since their creation in 2006 and their first album « La Boulangerie » two years later, the four producers became inevitable when you think about a new scene breaking the barriers between musical genders. Hip Hop is at the heart of their craft, corner stone of their musical background and inspirations where the paths of J Dilla, Madlib, Flying Lotus, Kaytranada and the turntablists A-Trak, C2C and Birdy Nam Nam are crossing ways. Two things gather La Fine Equipe and those big names, the constant need of collaboration with other artists, and this thirst of discovery, main feature of the digger.

From 2008 to 2014, La Fine Equipe mastered its craft with the « Boulangerie », compilation gathering 34 beatmakers on 113 tracks. They also work on the creation of the label Nowadays Records (Fakear, Skence, Unno, Clément Bazin, Leska, Douchka…) and released more than 75 EPs and LPs in five years.
With an outrageous number of shows across the world, tour in Asia, South America, collaborations with several international artists… Their success changed the game: Whereas many producers coming from this environment where isolated, La Fine Equipe federated a growing scene and became its reference.
After years spent paving the way for other artists and creating a structure that could support the growth of a musical scene, they decided to go further and launch a new era with « 5th Season ».

Because the band works with eight hands and four brains, there’s nothing surprising in the fact that the album sounds like a condensed of each and everyone inspirations and experiences, from hip hop and sampling, to electronica, jazz and Latinas inspirations. If homogeneity is the new trend, La Fine Equipe isn’t ready to sacrifice its wishes to fit the mould.

« 5th Season » is also a glance at the world looking over our planet’s current state, the cosmos, the vegetal and these things that are greater and stronger than us, and the things and behaviour that could led to our loss.
It’s an almost apocalyptic vision of our future, but full of optimism at the same time. There is something solar and cinematographic in this album, a format that goes beyond the one chosen before, closer to playlist and compilations such as the three Boulangerie opuses remind us.

Loyal to their status of ambassadors, the four beatmakers keep on inviting other artists to complete their universe. Illa J and T3, respectively brother and partner (Slum Village) of the late J. Dilla, make the connection between a glorious past and the future embodied by La Fine Equipe on the track « The Source ». With « Aurora », it’s the solemn and mystical voice of Madjo that take this electro-pop track to another level. The American rapper Mr. J. Medeiros on the boom bap anthem « What Eva », the Montrealer ZeFire on « Typical », each and every artists brings its stone to the edifice of « 5th Season », giving to the album a limitless and freed musical richness.

But to release an album isn’t enough. In parallel, each member of La Fine Equipe continues to fulfil its multiples tasks and work on a new concept live show bringing a scenic and visual show in addition to their music. It is what the artists looking toward the future do, and La Fine Equipe is looking straight ahead.

AURORA (Ft. Madjo)
Already remixed by the quatuor on the beautiful track « Choose The Heart », it’s Madjo’s turn to be invited by La Fine Equipe for a collaboration. Her mystical voice, which fragility paradoxically seems to strengthen its power, turns the track into an epic pop anthem.

NOBU (Ft. Grems & 20syl)
The association of these three names seems obvious, like a family reunion. Grems did the visual of the anniversary box of La Boulangerie, 20syl (C2C, Hocus Pocus) was one of the beatmakers who took part in the project.
This time, the two big brothers are side by side behind the mic, for the first French speaking collaboration of La Fine Equipe.
On this trapy/footwork beat, the two rappers ring the alarm before it’s too late to save our house, the earth.

THE SOURCE (Ft. T3 & Illa J)
In the family of Hip Hop jewels of 5th Season, here is one coming from the USA. Fans of J Dilla and Slum Village since the first hour, La Fine Equipe pays its respects to its influences by inviting T3 and Illa J. Respectively member of Slum Village and brother of the legendary Detroit producer, these two MCs build a bridge between the eras and let their sharpened flows confuse our perception of time.

5TH SEASON (Ft. Fakear)
A second collaboration with their little brother from the Nowadays Family, Fakear. Eponymous title, it represents the universe of both entities, true road trip through Fakearians melodies and La Fine Equipe’s funk declined in five seasons.

Made of four beatmakers (oOgo, Chomsky, Mr Gib and Blanka), La Fine Equipe has been under the spot of the French electronic scene since the beginning. Well established in the hexagon, the four beatmakers drove the attention of medias and prescribers such as Arte, MixMag, Fact, Tsugi, Trax, Radio Nova or Boiler Room who invited us to represent the French electronic scene in Paris and London. ... more

Bandcamp Daily  your guide to the world of Bandcamp